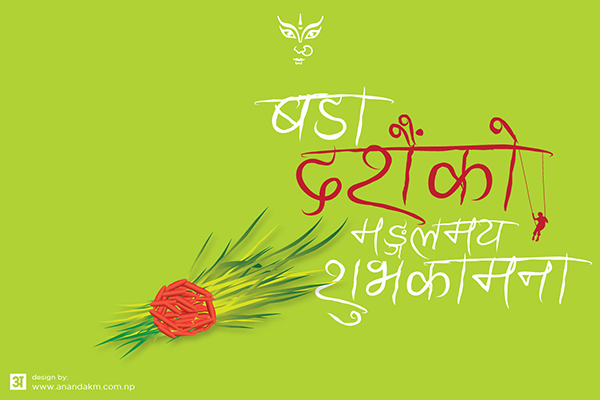 The time of year has arrived finally, Dashain also known as “Vijaya Dashami” or “Bada Dashain” is knocking at the front door for Nepalese people. It is the biggest festival of Hindus and marks the victory over evil. Dashain is celebrated for 15 days. It falls in the month of Aswin and Kartik. (September/October). It marks the event where Goddess Durga slayed a terrible demon Mahisasur who terrorized the earth in the form of brutal water buffalo. It also marks victory of Lord Ram over Ravana-the fiendish demon king.

The first nine days are about ferocious battle between Goddess Durga and Mahisasur. On the tenth day, Mahisasur was killed. The last five days are the celebration of the victory of goddess Durga and her blessings to our world. In Nepal during Dashain government declares public holiday. Schools and offices are closed and it is marked in the Nepalese calendar as well. People clean, paint and decorate their house at Dashain. Families are re-united, missing come home and some who are not with their families call home and convey greetings and there is an exchange. Those who unite have dashain parties with friends and family. They play cards, fly kites, go shopping, enjoying delicious meals, put tika from the elders of the family and receive blessings and dakshina. Dashain is celebrated on a day to day ritual. First day is called Ghatasthapana and on this day ‘Jamara” is put on Dashain ghar. Day 2 is called Ditiya and worshipping Goddess Durga continues at Dashain ghar till the seventh day. Third day is Tritiya, Fourth is Chaturthi, Fifth day is Panchami, Sixth day is Sashthi, Seventh day is Fulpati or Saptami, On Fulpati, sacred leaves of Bel tree, Sugarcane are brought from Gorkha Palace to the Hanuman Dhoka where main Dashain Ghar is established. It is also known as (Mui Kot). This festival takes place at the end of monsoon season and at end of harvest time of rice crops.

Nine forms of Durga are Brahmani, Mahesvari, Kumari, Vaisnavi, Indrani, Mahakali, Mahalakshmi and Tripurasundari. Each form represents each of the nine planets in the solar system. Worshipping these goddesses helps to protect the people of our country from negative cosmic influences. Animals like goat, buffaloes are sacrificed and later feasted on the tenth
day. On Taleju temple 108 buffaloes are sacrificed in honor of victory of Goddess Durga over Mahisasur. Living maiden goddess “Kumari” makes public appearance and she is worshipped and made offerings by the people. During earlier time the king was given tika by the priest and King would give tika to his people as well. We saw this before the last Shah dynasty. Shops close their sales and everyone returns back to their homes. It is this re-union we celebrate with our relatives, friends playing swings making garlands, decorating, gambling and giving gifts.

Tenth day also known as Vijaya Dashami parent’s put tika on their child’s forehead. The elders do the same to the younger ones, lot of feasting and celebration by giving gifts occurs on a joyous note. Tika ends on the final day of Dashain at Kojagrata Purnima- the full moon day. For some people Dashain is very delightful but for some who don’t have family members or some staying far and are not able to visit home, some who are financially handicapped and may not have celebrated Dashain as they would have expected all these things would not bring them happiness. However, our protector will look after them. Excess drinking and eating, gambling, spending beyond the limits, drinking and driving etc could be hazardous for you and your family. It is advised to moderate these habits, get together and celebrate in the true spirits, show concern and gratitude to your society. Be humble and moral, do well and stay healthy is our philosophy.

Happy Vijaya Dashami to all of you!

View all from cover-story