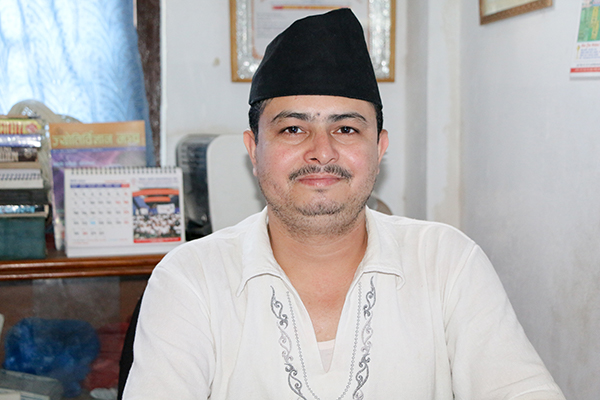 What does Dashain mean to you? Tell us about importance of Dashain festival?
Dashain is closely related to mythology and tantric manifestations. Lord Ram conquering Lanka after defeating Ravana. Secondly, Devi Mahatmya found in Markandeya Puran. Each year there are four Dashains. They are Chaitra Dashain at spring season, Ashad and Marga Dashian known as gupt Navaratra. Autumn season sees Bada dashain which is celebrated in the common households. Dashain has no political affinities it is truly spiritual. This year the auspicious time for “tika” is 11:45. Kings of Gorkha earlier adopted the auspicious hour for receiving tika. Newars don’t have auspicious timing for tika. President and government officials seek auspicious time for taking tika but it is not mandatory for the common citizens. As per rituals after Devi dispersion we can receive tika from our elders. Newar communities call it Mwohni and in Maithili it is called Durga Puja. Shastras see it is symbolic to make offerings to god and tantric see sacrifice of animals to god and eating as Prasad. Scientific aspect says there are six seasons and it takes from sun transitions in zodiac signs. Festivals re-unite family members and they spend time in harmony forgetting pettiness, receive blessings. So in these aspects Dashain is important festival in our Country.

Why is Dashain celebrated for nine days is there any reason behind it?
Navaratra embodies worshipping of nine avatars of Devi. There are nine planets in astrology known as navagrahas. First these nine grahas are worshipped to satisfy Devi. Then we celebrate after the worship of navagrahas. In our tradition we must satisfy the ancestral graves with “Pitripuja” if it is not done even if the god bestows upon us ancestors take it away whatever god has given to us. So first we do “Pitripuja” after that we do Navagraha puja. Finally, we celebrate the occasion of Dashain.

Why do we give blessings after tika to the younger ones?
Generally blessings are given for longevity of the lives of the younger lot. Also, may the younger receive the boon from the highest forms of god. For girls the blessings they get are, may they get power and virtues from Goddess Kali, the fiercest form of goddess Durga and anything negative in them will be destroyed and goodness stay with them forever. It is also motivational and build their self-esteem.

What is the significance of Jamara at the time of tika?
Seeds of barley or rice or corn are sown in the dark room as jamara in a container like an earthen pot or a tapara. Jamara which is yellow in colour, as it is grown in dark, is considered sacred. It is worn on head as Durga Mata’s Prasad on tenth day which is called “Vijaya Dashami”. It has therapeutic meaning also because Banaspati is the source of nourishment for human body and Shastra says barley, rice, corns are consumed by human body and it is an offering also. Barley Jamara is very good for health if we extract and drink its juice.

What is the reason for sacrificing animals to goddess?
Myth was that Kaal which means death had two teeth for chewing out the life of the living beings. It activates twice in Spring and another in Autumn and if it needs to chew then it had to be people. So, instead of people the animals were sacrificed as it would content him and make us secured. Also, for suppressing the negative energy sacrifices are made. In villages temple are either located at top or at bottom not near the house so sacrifices are offered there to ward off evil spirits and negative energy of that area.

View all from interviews