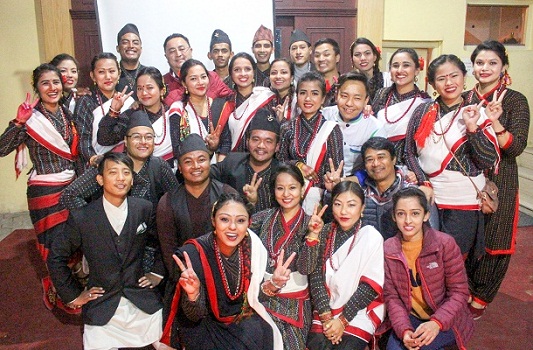 Newari Event named as ‘Milijuli Bhoye’ was organized by 2014th batch of Silver Mountain School of Hotel Management. This event was the combination of cultural performances, live food station, and the traditional Newari fest ‘Samaye Baji’ which included 29 Newari dishes. The concept of the event was to basically create a rapport between the college faculties and we; the final year students.  The event was organized sustainably, where we tried to reuse discarded items, promote local and authentic Newari culture, foods, and mini museum for Newari musical instruments and also buy from local suppliers.

Everything begins with an idea; few friends came up with the idea of doing something different but initially the idea was just a kind of tea break discussion. Later, the discussion grew among the whole 7th semester. Since, most of our friends showed interest towards it, we thought of doing this event “Milijuli Bhoye”.

Jasmine Thapa student of 7th Semester says: - Doing the event was not easy, convincing friends and bringing everyone together was a challenge. However, we batch mates were very dedicated and we worked together against any challenges that came in front of us.

Working as a group was the most fun part of the event. Collecting reusable items from waste collection area and using them as decoration props was the most creative and fun part. The hustle and bustle of shopping, arranging and managing everything made us unable to think anything beyond event. The late evening preparations in college and the recreational dance of us were the moments of immense happiness which made the bonding between us stronger than ever before.

During the event, we then came to know, our hard work was worth appreciation when every teachers were proud of us. Our effort got the best reward when we were served by our teachers. It was the moment of emotional attachment, happiness and pride.  It turned out to be a night to be remembered for life time. We are really thankful to everyone who directly or indirectly helped us in successfully organizing this event.

View all from food